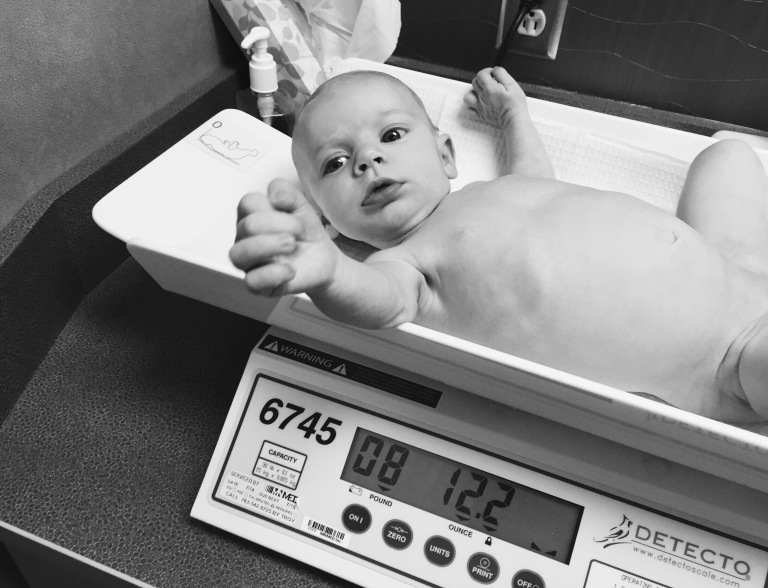 Sailor Grace… you are tiny.

Lets start with Jan. 9th – this little girl’s birthday! Sailor weighed 7 lbs. 14 oz. which is pretty average! I only gained 10 pounds while I was pregnant so she was actually bigger than I was predicting. I decided early on in my pregnancy that I would breastfeed and even if it was challenging I would work at it as it felt very important to me. Lucky me Sailor had no problem with breastfeeding in the hospital and it seemed very natural for both of us. Sailor’s weight dropped to 7 lbs 3 oz. which is pretty normal to drop… when we went home I fed Sailor every 2-3 hours and she seemed to be a great eater! A few days later we went to her first doctor’s appointment and met her pediatrician. She was up 4 oz. (which didn’t seem like that big of a deal) but her pediatrician was over the moon and said that’s very impressive for a newborn! Over the next 2 weeks I felt like she was doing great as she seemed to be eating all the time and always let us know when she was hungry! At her 2 week appointment we were told she should’ve been back to her birth weight but was only at 7 lbs 12 oz. – honestly Andy and I thought it was kind of annoying how “disappointed” they were that she was 2 oz. shy… but we also have never done this before so we didn’t know whether it was actually a big deal or not. I was sent to the hospital with Sails to meet with lactation to make sure all was good… turns out it was! It seemed crazy (but also interesting) what all they did to check on my milk supply and sailor’s intake. They would weigh her, have me feed her on one side, weigh her… feed her on the other side, weigh her… wait until she peed… weigh her… but they said I was doing great with nursing and she was just fine!

Fast forward to her 2 month appointment. I made Andy come with me as I was nervous for her first set of shots and had been warned moms often cry haha… We were expecting her to be on the tall side, smaller in weight and head size.. long and lean! We placed her on the scale and it says she’s 8 pounds, 12.2 oz ….. when the nurse went to put it in the computer she second guessed herself as that weight seemed way too small (I agreed) Andy said no that’s what it said… so we went back and weighed her again to be sure… sure enough 8 pounds 12.2 oz. When the nurse left the room I said to Andy that’s extremely small… we didn’t realize until the doctor came in just how small that was. He plugged her measurements in the computer and it showed her height was in the 83%, head size 24% and weight came up as the 2% (meaning 98% of babies her age are larger than her). He told us it was serious and we needed to get her weight up ASAP. Infants should be gaining an ounce a day which means she should’ve been up 4 pounds from her birth weight and wasn’t even up a pound. He said if she didn’t gain a pound in a week she would be hospitalized (feeding tubes, IV’s etc…) that was terrifying. She took her shots like a champ and I somehow managed not to cry. We were instructed to come back in a week for a weight check and so they could decide if she would need to be admitted or not. Of course I wanted to keep breastfeeding but we were encouraged to try and give Sailor a bottle of formula after every nursing session with hopes to fatten her up.

We worked hard feeding Sails- so much so that she often looked milk drunk or would pass out in the middle of eating because she wasn’t used to so much food. Formula was a no go (although now we’re having more success) so I was pretty much pumping like it was my job… thankfully when I brought her back in she gained 8 oz. I was nervous that wasn’t enough but her pediatrician said as long as she moved up to 3% we wouldn’t have to go to the hospital… girlfriend was at 3.2% !!! We still have weight checks ahead of us but so pleased she’s moving in the right direction!

***Showing off her muscles